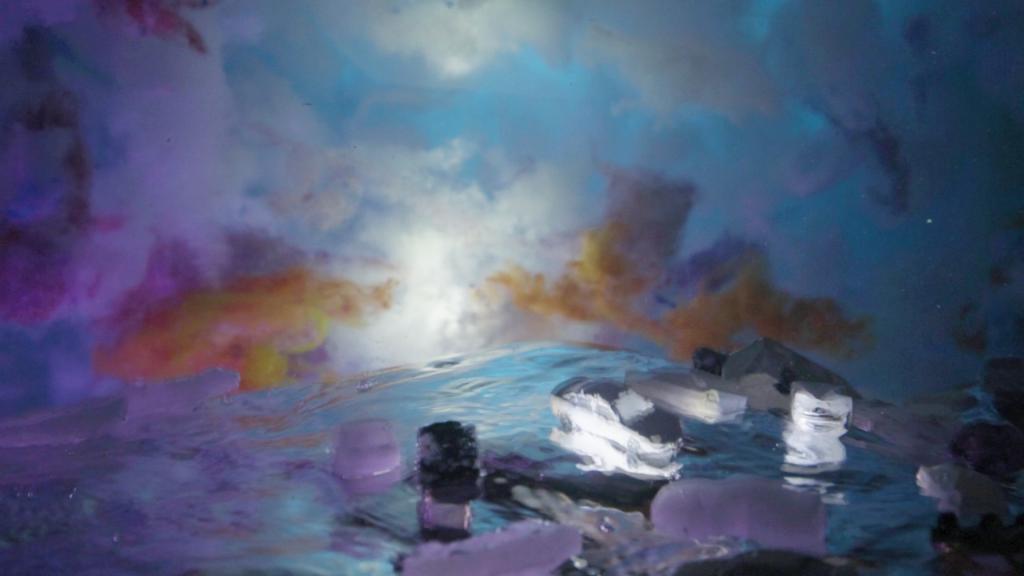 Knot Projections 2019: Imagining Publics concludes this November with a series of consecutive weekends of public projections featuring two atmospheric and environmental video works by Ottawa-based artists Maayke Schurer and Sasha Phipps. Occupying the south-facing facade of the University of Ottawa STEM cCmplex, these large-scale projections will be visible on Saturdays and Sundays, on alternating nights, from various points along Colonel By Drive, the Rideau Canal, Nicholas Street and the uOttawa campus.

Tranquil Traffic is a new work by Ottawa artist Maayke Schurer intended for outdoor projection positioned near vehicular traffic. Exemplary of Schurer’s use of miniatures and hand-made visual effects, the video produces a deep, lush and liquid atmosphere over the course of its one-hour looped duration. Tranquil Traffic is book-ended by a sensational and painterly sunrise and sunset, their soft hues generating a deceptively serene backdrop as the frame fills with slow-moving ocean water, rising beneath a fleet of upended, floating vehicles. Situated near the constant flows of Nicholas Street and Colonel By Drive traffic, the surrounding motorists become implicated within the contents of the projection’s leaky frame, where forces of land and sea meet at an ominously tranquil horizon.

Maayke Schurer is engaged in the development of magic realistic moving image works, which entail real-time experimentation without the use of digital effects or manipulation. As such, her works are handmade, using naturally occurring elements such as light, smoke, water and reflection. Her motivation is two-fold. First, her deep concern for the environment meets a conviction that true change does not occur without an initial shift in individual awareness. Second, she believes in the ability of handmade objects to communicate a more powerful message about the environment than could be achieved by direct assertions of fact. Hence, while her work is firmly rooted in the here and now, it opens onto scenarios nostalgically constructed from the imagination and can be seen as highly dramatized nature documentaries. Schurer is a graduate of Queen’s University where she received undergraduate degrees in Fine Art and Biology. She received an MFA from the Glasgow School of Art in 2009. She currently teaches and edits video in Ottawa where she lives with her husband and five children.