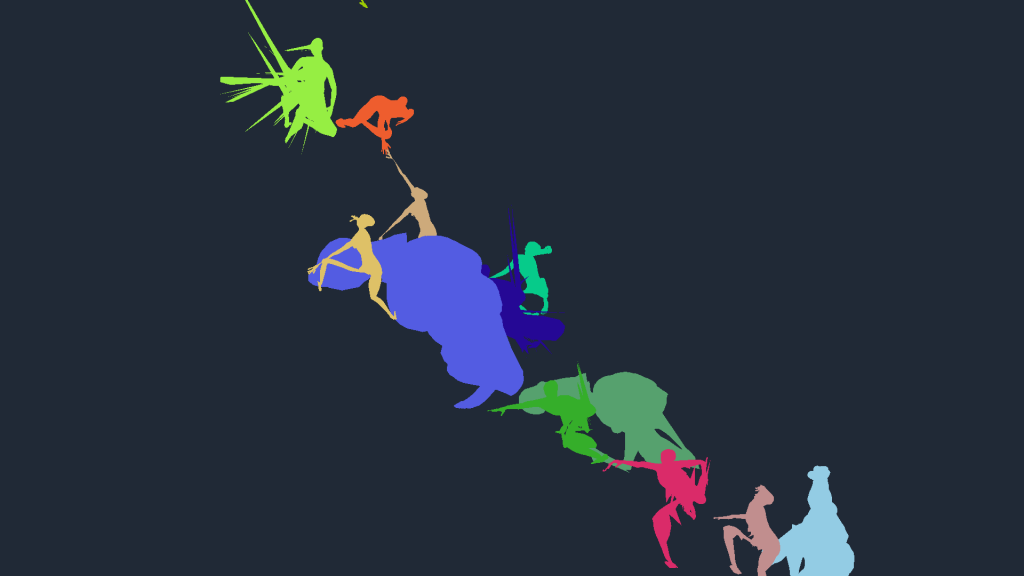 How can public art work with, against and beyond the monumental? How can it scale up to address the monumentality of environmental extraction, the long reverberations of colonial violence, or the depths of ideological entrenchments?

Pansee Atta explores these questions in her video projection we only liberate ourselves by binding our liberations to those of one another, which visualizes the counter-monumental as an intervention upon a practice that has directly shaped local histories, politics and geographies in the National Capital Region: the containment of water - a legacy manifested most prominently in the Rideau Canal and Chaudière Falls.

Understanding containment of bodies - of water and persons – to be a foundational ordering logic of colonial expansion, Atta uses her video projection to create a space of excess, setting in motion a counter-flow of uncontainable, surging corporeality. Streams of animated bodies, ungovernable in their form and function, reject atomization to operate as a fundamentally interdependent swarm of subjectivities. Assembling perpetually, they scale up a rocky natural facade of Victoria Island, seemingly emerging out of the watery depths and interacting with the contours of their environment.

Rather than creating a discrete, contained video with a fixed duration, Atta’s compositional strategy is itself an uncontainable system, operating on a continuously running animation script that randomly generates streams of monstrous figures, each mutually aiding one another as they scale the height of the frame. As such, Atta’s work may be viewed indefinitely without encountering a single repetition – a formal irreducibility that exceeds the structural rigor of containment and its relations of enclosure. This is an unruly radiance, bound together by allyship, and borne of a shared struggle.

Pansee Atta is an emerging Egyptian-Canadian artist and scholar whose practice considers themes of colonization, feminism, and Muslim representation, as well as the role of Canadian cultural institutions in legacies of epistemic violence. Her multimedia practice includes new media forms such as GIF animation, 3d-printed and laser cut sculpture, as well as installation, painting, and video work. Previous exhibitions have taken place at La Centrale Galerie Powerhouse, the Art Gallery of Mississauga, Z Art Space in Montreal, MSVU Art Gallery and others. As a member of Turbines Curatorial Collective she co-curated UTOPIAS, a 3-day Queer performance art festival in Kingston, Ontario. Previous residencies include the Impressions Residency at the Montréal Museum of Fine Arts, the SparkBox Studio Award, and at the Atelier of Alexandria. Her current research investigates the decolonial role of racialized communities in ethnographic museum representation. She is now completing a PhD in Cultural Mediations and a diploma program in Curatorial Studies at Carleton University, and continuously collaborating on community-based artistic and curatorial projects.