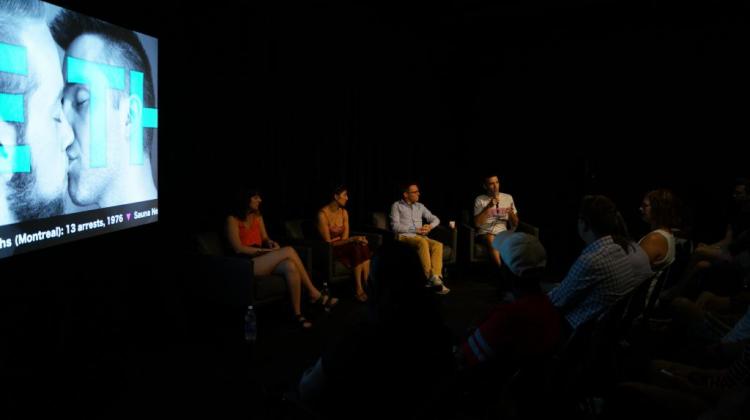 - - - - -
Don't Believe the 69' Hype! was an artist talk and panel on the mythologies and realities of the 1969 Criminal Code reform and its impact on the lives of queers, sex workers, and those seeking abortions. The event began with a brief talk from artist/activist Ryan Conrad whose commissioned video projection Don't Believe The Hype! is on display in Ottawa’s gay village from August 16th-25th as part of Knot Projections 2019: Imagining Publics, an extended public projection series involving five local artists. Ryan’s brief talk about the work was followed by context-setting commentary from Tom Hooper (Historian; Faculty Member @ York University), Ummni Khan (Associate Professor, Law and Legal Studies @ Carleton University) and Darrah Teitel (Playwright; Campaign Officer, Action Canada).

Ryan Conrad is artist, activist, and scholar based in Ottawa. He is currently a SSHRC postdoctoral fellow in the Cinema & Media Studies Program at York University where he is working on a manuscript entitled 'Radical VIHsion: Canadian AIDS Film & Video.' Previously he held a postdoctoral fellowship at Carleton University with the AIDS Activist History Project. He earned a PhD from the Centre for the Interdisciplinary Study of Society and Culture at Concordia University and an MFA in interdisciplinary studio arts from the Maine College of Art.

Conrad is the co-founder of Against Equality, a digital archive and publishing collective based in the United States and Canada. He is the editor of the collective’s anthology series that are compiled together in Against Equality: Queer Revolution, Not Mere Inclusion (2014). He has also contributed single-authored and co-authored chapters to several anthologies including: Decolonizing Sexualities: Transnational Perspectives, Critical Interventions (2016), The Gay Agenda (2014), Queering Anarchism (2013), and After Homosexual (2013). His work as a visual, media, and performing artist has exhibited internationally in Europe, Asia, and North America.

An archive of all his projects is available online here.
Darrah Teitel

Darrah Teitel is currently the campaigns officer for Action Canada for Sexual Health and Rights. Previously, Darrah worked on Parliament Hill as a legislative assistant for the official opposition critics for the Status of Women and Indigenous Affairs. Later, she worked as the Director of Advocacy for the Canadian Artists Representation. Darrah is a lifelong socialist feminist and activist, a member of the International Socialist Organization, Independent Jewish Voices and a founding member of the Courage Coalition. Darrah is also a playwright, whose work has been produced across Canada and is coming theatre near you! Her most recent productions in Ottawa, Behaviour (GCTC) and The Omnibus Bill (Tactics) were both concerned with intersecting sexual rights.

Tom Hooper is a historian who researches the criminalization of LGBTQ2 communities in the decades following the 1969 criminal code reform. He also works as contract faculty in the Law and Society Program at York University.

Ummni Khan, S.J.D., is an Associate Professor in Legal Studies at Carleton University. Her scholarship addresses the legal and cultural construction of sexual deviancy in relation to gender, racialization, class, and disability along with other axes of difference and identity. Her current major research project addresses the criminalization of sex trade clients and the possibility of a constitutional challenge.