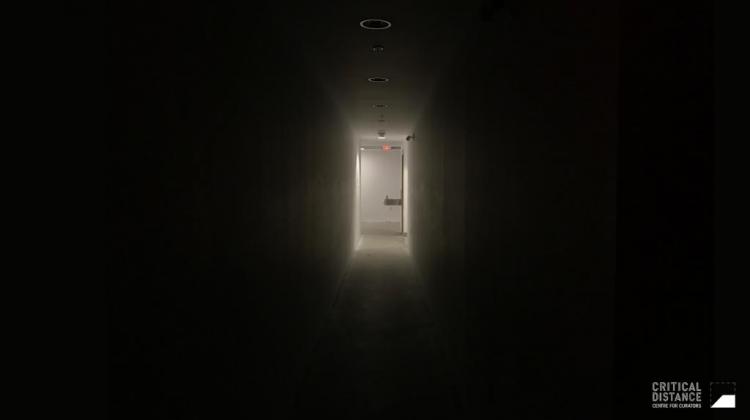 Knot Project Space is excited to be hosting curator Shani K Parsons as participant in a special third iteration of its process-driven residency program Expanded Practice. Over a two-week intensive period, the Toronto-based curator and founding director of Critical Distance Centre for Curators (CDCC) will utilize Knot Project Space’s uniquely malleable presentation capabilities to reflect on and strategize around curatorial approaches to the installation of video and sound within poly-vocal, group exhibition contexts. Of specific interest to Parsons during her residency will be to develop and modes for mapping various works into sequential, transitional flows, weaving through a particularly challenging non-standard exhibition site in Toronto. These experimentations will seek the potential for a 'fugitive' display of video and sound within an architectural space, rather than immersive inflections. Beyond the scope of this short-term residency, a scaling-up of these installation poetics will later be transposed and amplified into an expansive exhibition produced by Parsons that is set to open in Spring 2020 in Toronto.

This residency also represents the second point of organizational exchange within an ongoing dialogue between Knot Project Space and CDCC, which has sought to produce points of contact between media art presentation and contemporary curatorial practice. The first of these encounters took shape as the group exhibition Public Syntax, guest curated by SAW Video Programming Director Neven Lochhead in February 2019, which unfolded in CDCC’s gallery space and the surrounding hallways and stairwells of the building. A publication documenting and reflecting on this exhibition and organisational exchange is forthcoming in early 2020.

About Expanded Practice
Expanded Practice is Knot Project Space’s intensive residency program, offered to artists and curators to push the scope of their projects beyond standard screening environment and into installation/exhibition formats. While typically offered to SAW Video members and practicing artists, this special edition of the program will take a curatorial shift to consider the challenges and opportunities for curating media artworks experimentally in non-standard exhibition-making protocols.

The resident curator is provided with a fee, a materials budget, unlimited access to the project space and an array of audio-visual equipment for the duration of their residency, during which they are invited to experiment with the spatial orientation of the moving image, the distribution of sound, and other tactics for presentation and audience encounter. Through an emphasis on open, hands-on technological play and frequent discussions with Knot Project Space’s curatorial staff, the Expanded Practice residency seeks to create a collaborative environment in which the participant strategizes with and through the art-space itself, to develop mutual curiosities and knowledges of the materiality and physicality of time-based media.

Drop-In Sessions
In order to sustain an open, tangential structure for experimentation, there is no final public exhibition attached to the participation in the Expanded Practice residency. Instead, the public is invited to visit the space during a series of “Drop-In Sessions” at points throughout the residency period (times listed above) to view the working and thinking in an in-progress and modular state. The residency participant or Knot Project Space’s curatorial staff will be present at each of these sessions to contextualize the work for visitors, and frame the trajectory of their explorations.

Shani K Parsons (Canada/US, b.1970, Philadelphia) is an independent curator, designer, and founding director of Critical Distance Centre for Curators. With degrees in architecture (Temple University, Philadelphia, 1994) and graphic design (RISD, Providence, 2000) she has pursued a multidisciplinary practice within both independent and institutional contexts and has produced an eclectic body of work ranging from intimate artist’s books to immersive exhibitions, bringing to each her skills, experiences, and interests as researcher, writer, designer, artist, administrator, curator, and critic. Selected past projects include: EINSTEIN and the Arthur Ross Hall of Meteorites (special exhibition and permanent hall for the American Museum of Natural History), Chinatown Film Project (identity and materials for Museum of Chinese in America), and More Pieces for the Puzzle: Recent Additions to the Collection (identity and materials for MoMA exhibition curated by Robert Storr). After moving to Toronto from New York, she became interested in creating a hybrid model for curating and exhibition-making, one that provides institutional support for independent curators at all stages in their professional development and advances best practices for curatorial production and publishing, as well as much-needed opportunities for community building, professional development, and critical discourse.

Part gallery and publisher, part professional association and network, CDCC exists to: provide opportunities and resources to curators and artists for the production of exhibitions and projects within a critical framework; foster curatorial community and discourse at all levels of professional development; promote education, sustainability, and best practices in curating and exhibition-making; and more. With a focus on critically engaged, collaborative, and cross-disciplinary practices, underrepresented artists and art forms, and community outreach and education in art and exhibition-making, Critical Distance is an open platform for diverse curatorial perspectives, and a forum for the exchange of ideas on curating and exhibition-making as ways to engage and inform audiences from all walks of life.