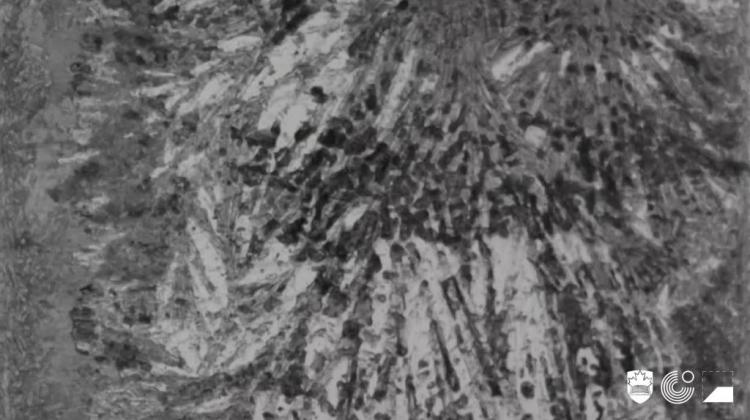 With support from Carleton University's Centre for Transnational Cultural Analysis and Film Studies Program, and The Goethe Institute in Montreal, Knot Project Space is proud to present a special performance/reading by artist and filmmaker Filipa César. This live event will also function as the reception for César's short-term single-channel exhibition Conakry, which will be on display at Knot Project Space from November 19th - December 1st. This reading/performance and its related exhibition are presented as part of a series of Fall/Winter 2019 programs and seminars at Knot Project Space looking at relationships between voice, fiction, collectivity and publication. More information about these works and related programs can be found below.

“A reading of Amílcar Cabral’s agronomic writings exposes substrata of a syntax for liberation later performed in guerrilla language and the struggle against Portuguese colonialism in Guinea-Bissau and Cape Verde. This visual and sonic reading explores the definitions of soil and erosion that Cabral developed as an agronomist, as well as his reports on colonial land exploitation and analysis of the trade economy, to unearth his double agency as a state soil scientist and as a ‘seeder’ of African liberation.

Cabral understood agronomy not merely as a discipline combining geology, soil science, agriculture, biology and economics but as a means to gain materialist and situated knowledge about peoples’ lived conditions under colonialism. The scientific data he generated during his work as an agronomist, along with his poetry, was critical to his theoretical arguments in which he denounced the injustices perpetrated on colonised land, and it later informed his warfare strategies. Cabral used his role as an agronomist for the Portuguese colonial government subversively to further anti-colonial struggle. Cabral’s process of decolonisation was understood as a project of soil reclamation and national reconstruction in the postcolony. His agency as an agronaut ventures through soil cosmologies, mesologies, meteorisations, ‘atmos-lithos’ conflict zones, celluloid compost, violence of imperial consumption — the sugar question. Humble derives from Humus.” – text from Sonic Acts Festival (Amsterdam) who commissioned the original performance

Filipa César an artist and filmmaker interested in the porous boundaries between the moving image and its reception, the fictional dimensions of the documentary and the economies, politics and poetics inherent to cinema praxis. Characterised by rigorous structural and lyrical elements, her multiform meditations often focus on Portuguese colonialism and the liberation of Guinea-Bissau in the 1960s and 1970s. This research developed into the collective project Luta ca caba inda (The Struggle Is Not Yet Over). She gained a MA Art in Context at the University of Arts, Berlin. Selected exhibitions and screenings include at the São Paulo Biennial, Manifesta 8, Cartagena, and the Contour 8 Biennial in Mechelen, Belgium, and Gasworks, London. Festival screenings include the Kurzfilmtage Oberhausen, Curtas Vila do Conde, Forum Expanded at the Berlinale and the International Film Festival Rotterdam.