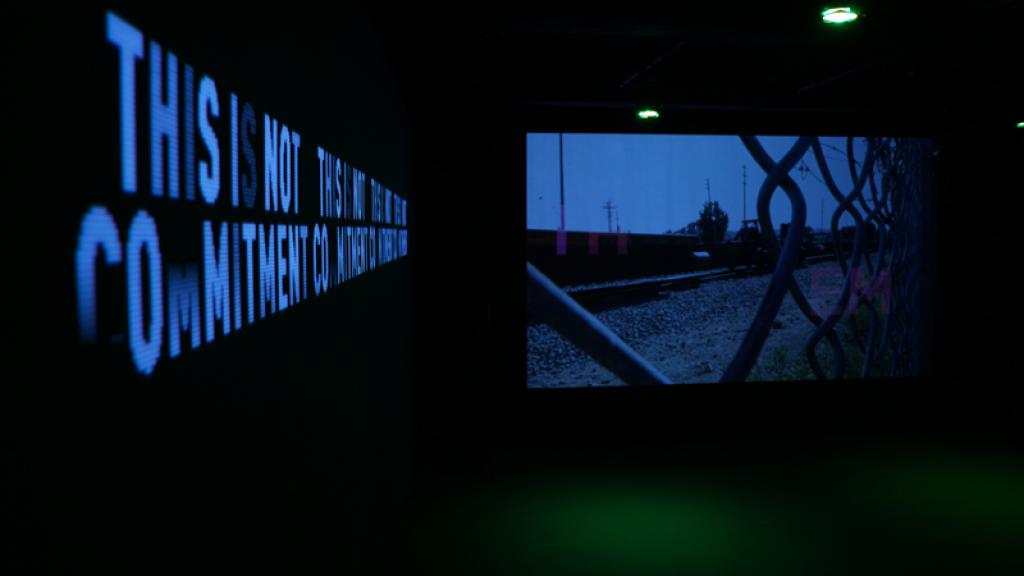 SAW Video and Knot Project Space collaborated with LA-based artist and writer Amanda Beech on a series of presentations and projects in March 2019. We began with an exhibition of her work Covenant Transport, Move or Die, installed in the gallery as large-scale projections with immersive sound. The work pivots between individual and group speech, question and answer exchanges, time-outs, and streams of graphic text referencing LED-screen signage. Through rapid editing and the layering of a thick soundtrack, the video accumulates a weight and velocity that throws its centre of gravity off onto a new axis, flipping the rules.

Covenant Transport, Move or Die is a multi-channel video installation that mixes scientific-style inquiry, pop and game show-style aesthetics. The work features five characters who occupy the site of a wasteland making up a workerist crew of manager, worker, programmer, consumer, and dealer. From this place of mythic abstraction they program and mobilize the unrelenting movements of economies, states, culture and people. They wade through the terrain of global capitalist power from a collective psychology that transcends the political stagnation of technology, industry and the mire of our present imaginary.

Amanda Beech is an artist and writer living in Los Angeles. Using a range of compelling rhetorical and often dogmatic narratives and texts, Beech’s work poses questions and propositions for what a realist art can be in today’s culture; that is, a work that can articulate a comprehension of reality without the terminal mirror of a human identity that is used to picture it.

Beech has shown her artwork and presented her writing at major international venues including; This Time, a video commission for the Remai Modern, Saskatoon, Canada, 2017; Covenant Transport, Move or Die at The Baltic Center for Contemporary Art, Gateshead, UK, 2016; and Sanity Assassin, in Neocentric, at Charim Gallery, Vienna, Austria, 2016. Other recent work includes her contributions to Art Margins, 2018 with the comic Realism and its Discontents; What Hope Looks Like After Hope, Homeworks VII Beirut City Forum, Ashkal Alwan, Beirut, Lebanon, 2015; Bots, Bodies and Beasts, at the Gerrit Rietveld Academie, Amsterdam, 2015; Speculative Aesthetics, Tate Britain, London, UK, 2015; and the presentation of the three-channel video installation Final Machine at both Agitationism, the Irish Biennial 2014, and L’Avenir, Montreal Biennale, 2014. Amanda Beech is Dean of Critical Studies, California Institute of the Arts, Santa Clarita, California.