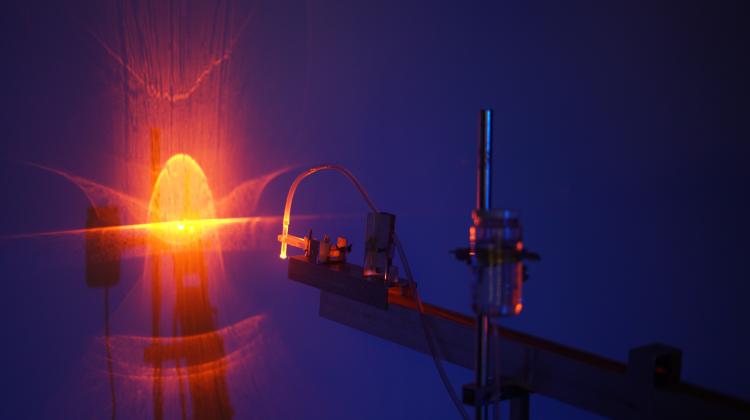 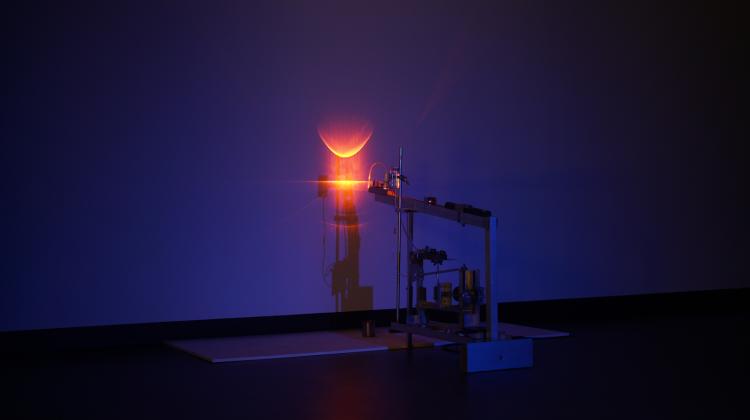 WiS is an acronym for “water in suspense,” an installation that connects the viewer with the invisible qualities of the natural world. Juan Geuer meant to engage us with such hidden phenomena as the microcosmic beauty of a drop of water mingled with light. This installation uses a peristaltic pump calibrated to deliver a single droplet of water before a warm orange beam emitting from a laser. The imagery of this interaction is projected to a magnified scale onto the wall. Geuer wanted to engage people with natural phenomenon, and here we can contemplate our own engagement in this as our shadow is overlaid through the blue light on the opposite side of the room.

Presented in the context of Carbon + Light: Juan Geuer’s Luminous Precision on view at the Ottawa Art Gallery.

Born into a Dutch family of artists, Juan Geuer left Holland just before the beginning of the Second World War, and immigrated with his family to Bolivia. He came to Canada in 1954, and from the late 1950s through the 1970s, worked as a draughtsman at the Dominion Observatory of the National Research Council in Ottawa. Having worked in glass, painting on canvas, and murals from the 1940s onwards, by the 1960s, Geuer began seeking alternatives that would better reflect the creativity he found in everyday life. He turned to producing more conceptual work in the early 1970s, looking to bridge art and science. Some of his work incorporates pieces of scientific apparatus, whereas other pieces analyze or incorporate natural phenomena. Geuer remains a Canadian pioneer in international new media art and science-based artistic investigations.