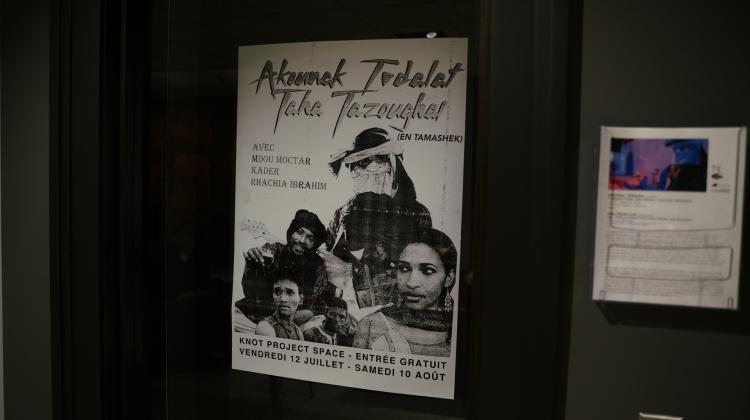 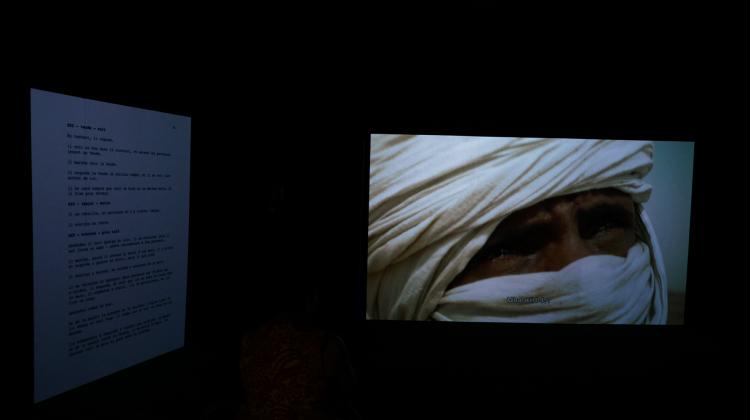 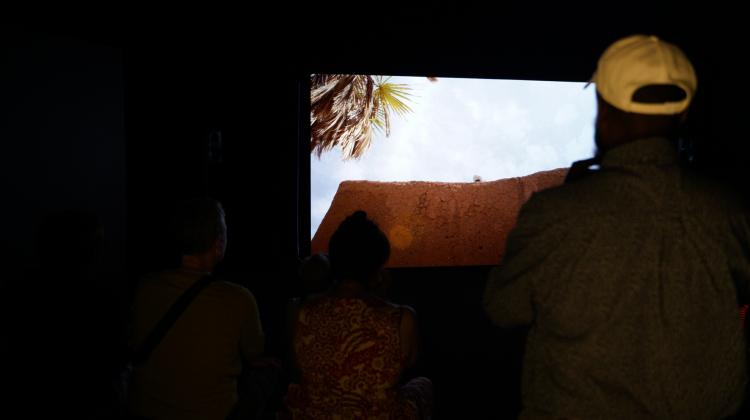 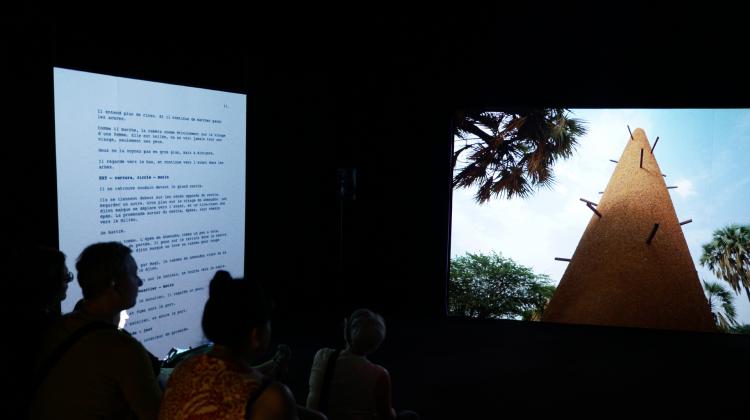 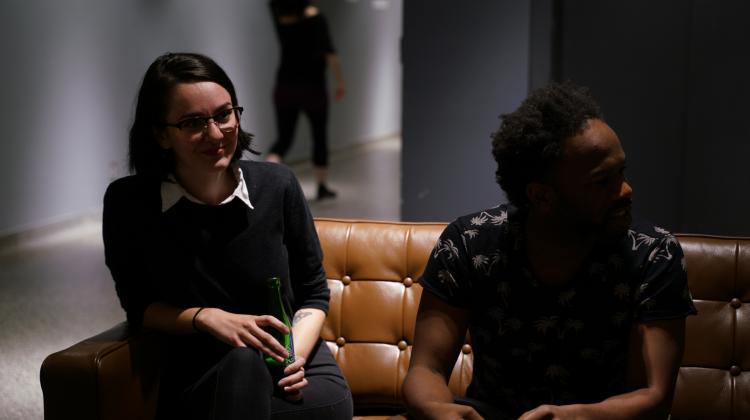 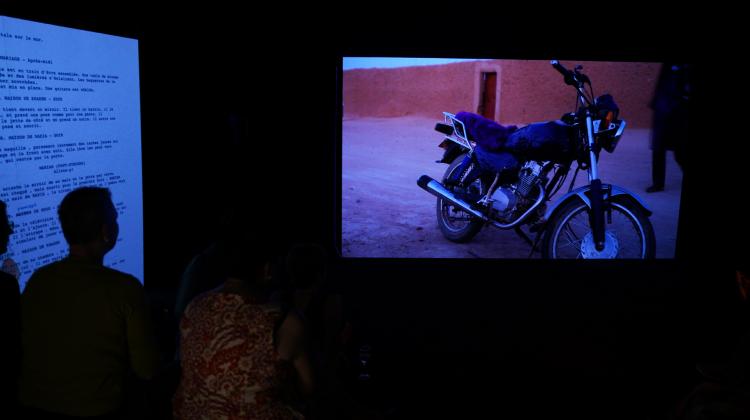 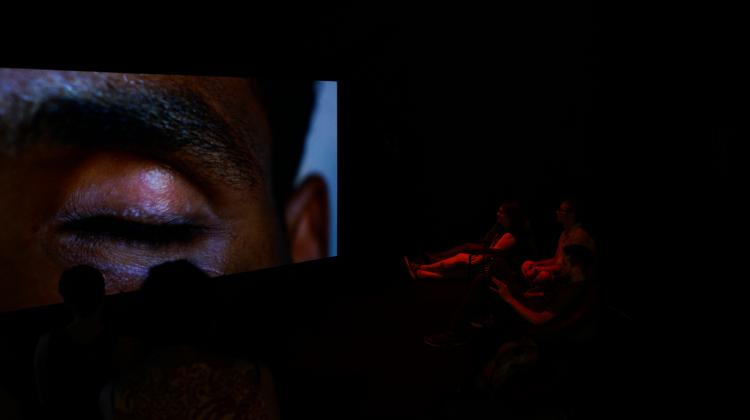 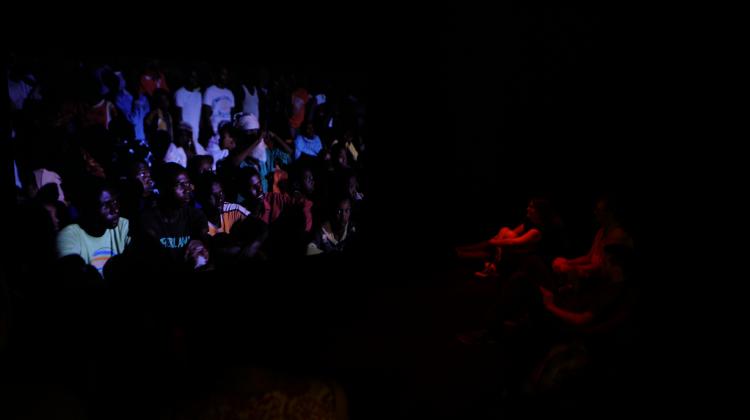 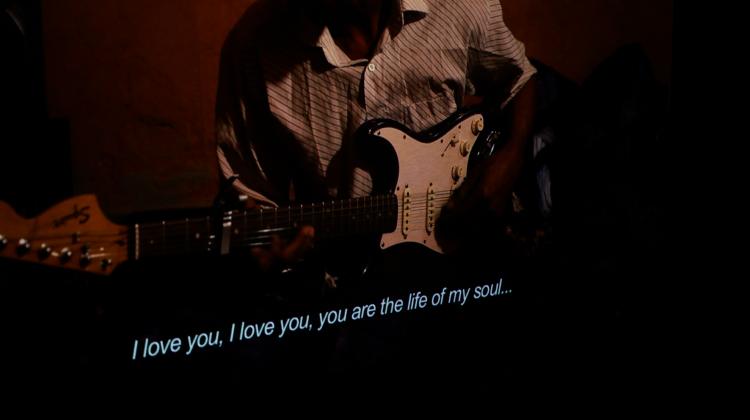 Presented in collaboration with Debaser, Timekode and Sahel Sounds

Akounak (A) [80 minutes] and Zerzura (Z) [90 minutes] play in this exhibition as a sequence, one after the other. While there will be set start and end times for these films, the space and narratives may be entered at any time during playback. For those looking to see the films in their entirety, screening times for the exhibition are below:

In collaboration with Debaser, Timekode and Sahel Sounds , Knot Project Space is pleased to present a special summer exhibition featuring two music-based films from the Sahara: Akounak Tedalat Taha Tazoughai [Rain the Colour of Blue with a Little Red in It] (2015) and Zerzura (2017). Both of these Tamasheq-language films are projects by the Sahel Sounds record label and its founder Christopher Kirkley, who employs a participatory mode of ethnographic, community-based filmmaking in which participants and actors play a central role in shaping the nature of the film’s dialogue, narrative and overall trajectory. The two films also speak to the potential of the ‘re-make’ as a mode for transcultural exchange, with Akounak transposing Prince’s 1984 classic Purple Rain into a desert landscape, and Zerzura recalling Jim Jarmusch’s 1995 western Dead Man, propelled by Neil Young’s meandering guitar improvisations.

At the heart of each of these works are two musicians from Agadez, Niger: the ‘Hendrix of the Sahara’ Mdou Moctar, and his rhythm guitarist Ahmoudou Madassane, who star in each film, respectively. In advance of a live performance by Mdou Moctar and his band in Ottawa on Friday, July 26th at Queen St. Fare, this exhibition presents Akounak and Zerzura alongside playback of their original scripts, treated by Kirkley and his team as points of departure and sites of negotiation. Through this comparative mode of viewing, between the script and the edit, loose narrative threads can be seen weaving in and out of scenes depicting everyday life of the Tuareg people. Stunning performances by Mdou Moctar and Ahmoudou Madassane transcend the fictions in which they are situated to tell a different story altogether.

In 1984, Prince took the world by storm with Purple Rain, launching the artist's career through a mythologized self-portrayal. Thirty years later the legend of ‘The Kid’ was reborn and transformed through an unexpected transnational exchange. Akounak Tedalat Taha Tazoughai pays homage to Purple Rain, and is set in Agadez, a city in the region Sahel in central Africa. The film, whose title translates as “Rain the Colour of Blue with a Little Red in It” is the first ever feature film made in the Tamasheq language of the Tuareg people (in which there is no word for the colour purple). Since its release in 2015 the film has toured internationally and has helped to expose the world to its star: virtuoso Tuareg guitarist, poet, and composer Mdou Moctar, garnering him international acclaim. The magnetic performances of original music that appear in the film point to how Moctar draws on both modern and traditional sources in his playing, and combines these elements into new sonic formulations. Moctar’s recent album Ilana: The Creator (released in March 2019) shows Moctar continuing to push the boundaries of Tuareg musical traditions.

Listen to the soundtrack.
Zerzura

Zerzura is genre-defying film that transposes a modern folktale with an ethnographic acid Western, inspired by the films of Alexander Jodorowsky and Jean Rouch. The film follows a young man in search of an enchanted oasis as he journeys through a surreal vision of the Sahara, crossing paths with djinn, bandits, gold seekers, and migrants. The film stars and is scored by Ahmoudou Madassane, a member of Mdou Moctar's band and a supporting actor in Akounak.

Listen to the soundtrack.
Mdou Moctar

Mdou Moctar immediately stands out as one of the most innovative artists in contemporary Saharan music. His unconventional interpretations of Tuareg guitar and have pushed him to the forefront of a crowded scene. Back home, he's celebrated for his original compositions and poetry, an original creator in a genre defined by cover bands. In 2008, Mdou traveled to Nigeria to record his debut album of spacey autotune, drum machine, and synthesizer. The album became a viral hit on the mp3 networks of West Africa, and was later released on the compilation “Music from Saharan Cellphones.” In 2013, he released “Afelan,” compiled from field recordings of his performances recorded in his village. Then he shifted gears, producing and starring the first Tuareg language film, a remake of Prince's Purple Rain (“Rain the Color Blue with a Little Red in it”). Finally, in 2017, he created a solo folk album, “Sousoume Tamachek,” a mellow blissed out recording evoking the calm desert soundscape.

Established in 2013, Debaser is an arts presenter that exists to support and exhibit creative music-makers, provide engaging and exciting programming, and amplify the work of those historically marginalized by the music industry.

Starting as an idea between some DJs to expand one city's musical horizons in 2005, TIMEKODE has become a soul/sole movement in the capital, and Ottawa’s longest-tunning monthly tradition of music and dancing. From humble beginnings at Café Nostalgica, to the golden era at the Eri Café, to the warehouse blowouts at Maker Space North, to it’s current iteration at D’Afrique; over its long run TIMEKODE has emerged as a beacon for the presentation of progressive plurality on the dancefloor in Canada.

Sahel Sounds is a project focused on culture in the West African Sahel. Sahel Sounds began as a blog by label founder Christopher Kirkley in 2009 to share field recordings. Today, it is a record label, artist collective, film production house, and arts organization. They work directly with artists that they represent and aim to have input and control over artistic endeavours. All profits are shared 50/50. They are committed to using culture as a means of communication, helping their artists build careers, and listening to good music.