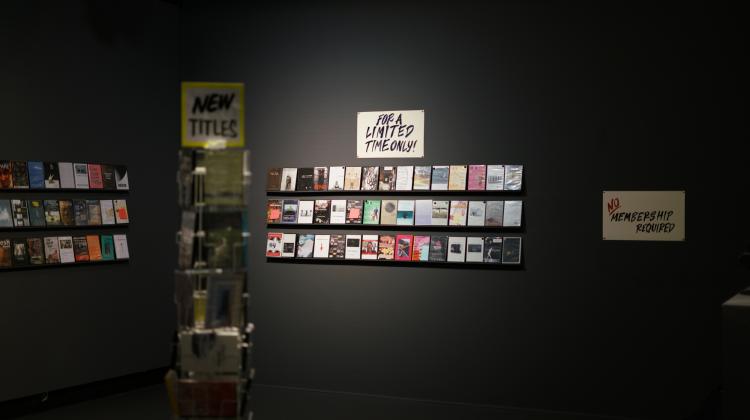 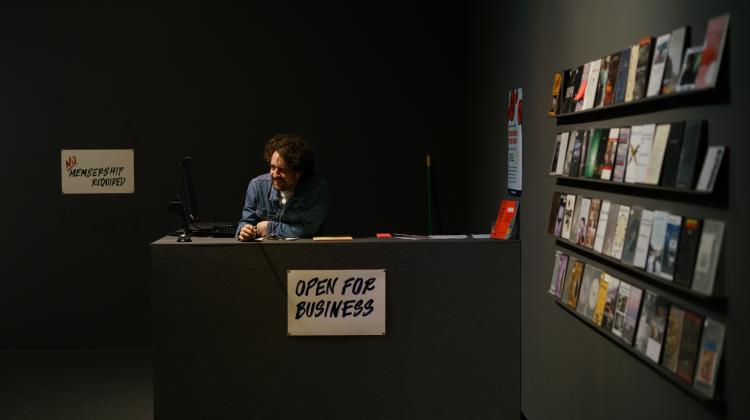 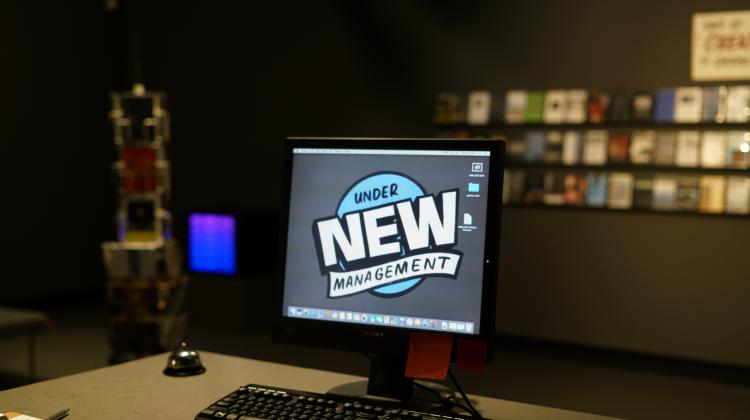 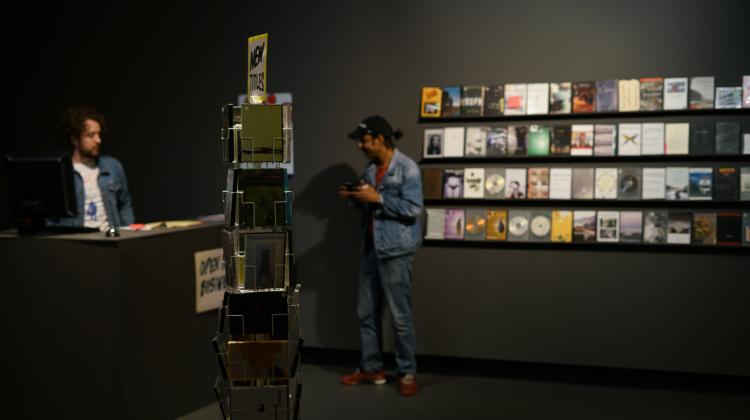 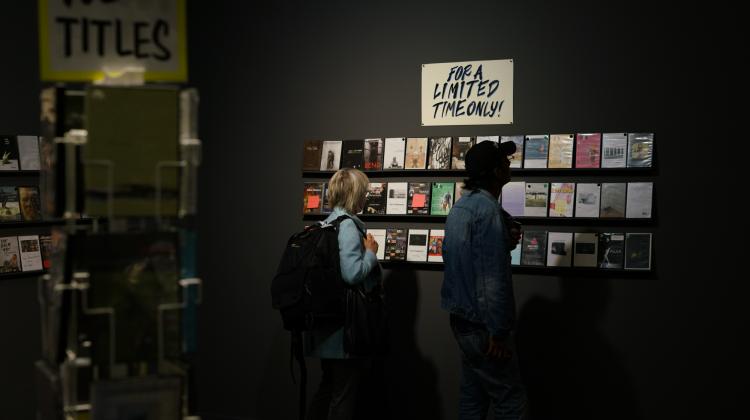 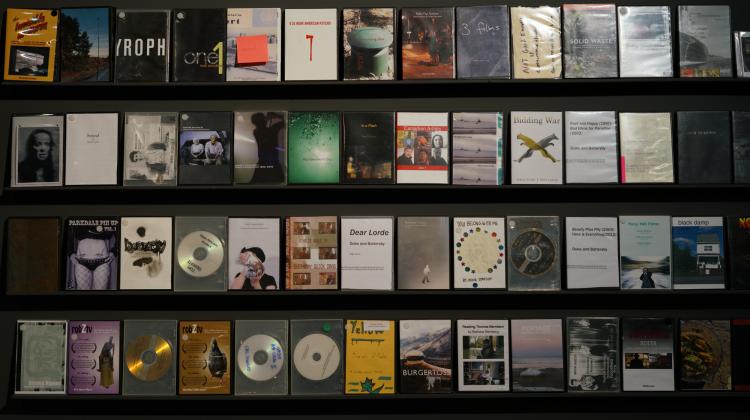 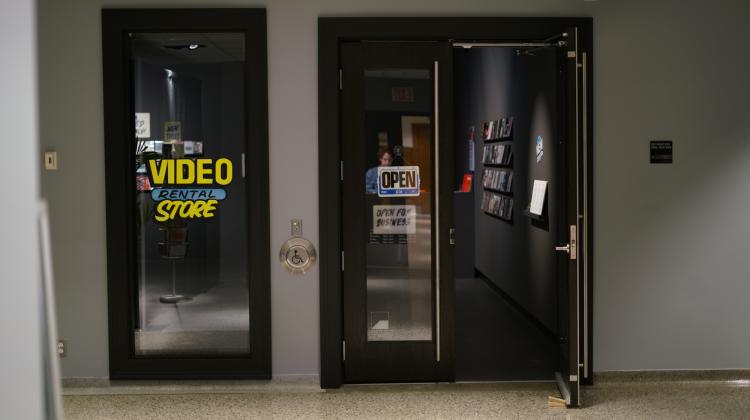 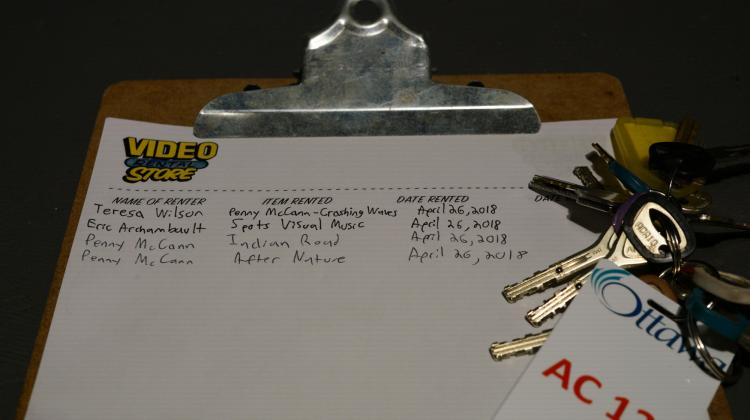 Taking the bus into Hamilton last weekend, I looked to the corner of Main and Queen only to see that the last video rental store hold-out, Select Video, had finally closed. I worked there part-time in the 90s. It smelled like stale popcorn and musty carpet. I doled out movie selection advice, placated parents looking for the most popular animation to keep birthday party guests occupied, and sold sugary treats to couples alongside their Saturday-night-in film finds. It was a successful business that saw hundreds of people a day, pass in and out of its doors. It was a neighbourhood refuge for entertainment and community connection. Select Video was the last of its kind, a dying breed, and now it’s a vape shop.

As the curatorial collective Under New Management (Su-Ying Lee & Suzanne Carte), we bring back those glory days of the video rental store. We invite you to enjoy the ease, simplicity, and nostalgia of walking down aisles full of potential viewing entertainment. But we’re not your typical video store. Far from it! Under New Management’s Video Store is a non-commercial venture that only carries artists’ videos, with a unique rental policy of non-policy and a pay-what-you-wish with what-you-wish program. Video Store is a project that employs all of the characteristics of a retail environment to serve the local community, while challenging the gallery’s role as an intermediary that delimits the viewer’s direct access to art and artists. The video titles in stock are artists’ works procured through an open call for submissions. “Customers” are asked to pay what they wish, which can be either cash or a non-monetary exchange. This payment model asks that the renter reflect on the value of art and demonstrate their appreciation or criticism of the work. This compensation can come in the form of a written review, book, tool, drawing, or snack. Cold, hard cash works too, but we encourage the audience to contemplate a more engaged means of communicating worth. This feature is an experimental form of involvement, where artists have the opportunity to receive responses directly from viewers. In turn, viewers have an uncommon channel to the artists. In addition to payment, rentals are also based on the honour-system to remove barriers that exist due to membership requirements, deposits, and return policies.

It is obvious now that the video rental business is no longer a viable enterprise. Independent establishments are almost completely obsolete with the advent of Netflix, iTunes, DIRECTV, On Demand, and the many online pirate movie sites. After large corporate chains, such as Blockbuster, closed their doors, it was only a matter of time before family-run businesses shared the same fate. The most unfortunate losses are the local independent operations that carried rare titles, cult favourites, documentaries, avant-garde cinema, and hard-to-find foreign titles. Under New Management’s Video Store provides audiences with the opportunity to view this type of content—content that is certainly not Hollywood-approved nor with mainstream aspirations. Our collection boasts over 250 titles, featuring a cross-section of genres including drama, fantasy, science fiction, comedy, and horror. They range from experimental shorts to non-narrative feature-length films. There’s even a small VHS section.

Since we started this rental store journey in 2013, some things have changed. Now the melancholic loss is not only for the shopping experience, but also for the technology itself. The movie as an object is no more. Many artists contributing to the 2018 edition found their computers unable to burn DVDs or the standard DVD cases unable to be found. To bridge this tech-access gap and facilitate greater participation, DVD burning sessions were generously hosted by SAW (Ottawa), HAVN (Hamilton), Modern Fuel (Kingston), and Syracuse University (New York). Honest Ed’s in Toronto is also no more, demolished to much chagrin at the end of 2017. A new condo will soon take its place. Best known for its discount deals on everyday household items and food, the store also became popular for its iconic in-shop signage, all created by staff artists Doug Kerr and Wayne Reuben. In an homage to this late, great discount mecca, Lena Suksi’s bright video store signage is a nostalgic nod to our recent past.

As you can see, all business is a risk. Such is true with our Video Store as well. At the heart of the project is an operational strategy that defies logical commercial success. Who assumes this risk? For one, the artists, as they incur the primary threat of not having their videos returned. Over the years, we’ve lost some, but we’ve gained some too. If a video is not returned to the shop before it closes, the circulation of the work is unknown and unpaid. And secondly, the audience, who also take a leap of faith in taking home an artist’s work. There is no instant gratification in the Video Store. As modern North American consumers, we have become so accustomed to experiencing risk-free access to movies via our smartphones. The anticipation of bringing home a video and playing it on your computer (or even, gasp, DVD player) is a commitment to chance. Will it be worth the effort? Will it live up to expectations? It is a gamble for sure.

As for that vape shop in Hamilton, only time will tell if it has the staying power to weather this trend, or if it too will go the way of the dinosaurs and die like the video stores.

We would like to thank all of the artists that keep the Video Store stocked and whose work can be taken home to enjoy:

Under New Management (UNM) is the curatorial team Suzanne Carte and Su-Ying Lee, a collective of cultural producers. With over fifteen years each in the art industry, Carte and Lee have launched UNM to channel their expertise and test the roles of the artist and curator with notions of audience, place and space. Operating as a mutable entity, UNM reinvents roles and shifts boundaries to inspire production and engagement. Hybridizing exhibition-based practices, we explore experiential methods to examine the relationship between art and its vast milieu.

Suzanne Carte is an award-winning curator and cultural producer living in Toronto, Canada. She is currently the Assistant Curator at the Art Gallery of York University (AGYU) and works with a dynamic team to produce high quality exhibitions and public programs. Within her independent practice, she has curated exhibitions in public spaces, artist-run centres, and commercial and public art galleries including You Cannot Kill What Is Already Dead, Video Rental Store, All Systems Go!, Under New Management, MOTEL and Man’s Ruin. Previously, she held positions as outreach programmer for the Blackwood Gallery and the Art Gallery of Mississauga, and as professional development and public program coordinator at the Ontario Association of Art Galleries. Her critical writing has been published recently in the AGO’s A.I.R. publication for Meera Margaret Singh as well as in Magenta Magazine, Art Writ, and Huffington Post. Suzanne holds an MA in Contemporary Art History from Sotheby’s Art Institute in New York and a BFA from the University of Windsor, and she is a member of the 2017 Toronto Arts Council Leaders Lab.

Su-Ying Lee is an independent curator living in Toronto, Canada. Her projects have taken place across Canada and in Hong Kong. She has also worked in institutions as Assistant Curator at the Museum of Contemporary Canadian Art (MOCCA), Curator in Residence at the Justina M. Barnicke Gallery, and Assistant Curator at the Art Gallery of Mississauga. Her practice often employs unconventional platforms and expands ridged boundaries around curatorial practice. Lee is interested in employing the role of curator as a co-conspirator, accomplice and active agent. She received a Masters of Visual Studies, Curatorial degree from the University of Toronto.