SAW Video Media Art Centre is proud to present the 2019 edition of OUTPUT, our second annual screening of new works by participants of the centre’s granting programs. Six works by Ottawa-based emerging, mid-career and established artists, four of which were directed by women, will be presented. A brief Q&A with the artists will follow the screening and the evening will wrap up with a reception, featuring music and cash bar.

In tandem with OUTPUT, our Knot Project Space will be hosting the first in a series of public drop-in sessions offered as part of Expanded Practice, a new residency initiative created to support SAW Video producing members to expand the scope of their projects beyond the screening environment and into installation/exhibition formats. During these drop-ins, visitors will have opportunities to experience artist Laura Taler’s El Adios, a work in progress developed with support from SAW Video’s Media Art Production Fund, in an installation context. The first drop-in will be held from 5PM to 7PM on June 20th at SAW Video’s Knot Project Space.

May Waves Rise From Its Floor | Matthieu Hallé | 2018 | ~10 minutes
Screening and performance by Matthieu Hallé, accompanied by musician Linsey Wellman
May Waves Rise From Its Floor is an improvised performance piece for visuals and sound. Flickering candlelight influenced by Hallé's breathing, is focused with handheld pieces of broken crystal onto a video camera sensor, which becomes the light source that illuminates a 16mm film of an abstracted, ocean landscape. In a dialogue with the live music, the visuals are spontaneously adapted and created through the minute gestures Hallé makes with his hands and breathing that translate into an otherworldly presentation of colour and movement.
Produced with support from SAW Video's Media Art Production Fund.

Venus | Liliana Raimund | 2018 | 12 minutes
Venus is a surreal art drama about a woman who is haunted by a traumatic past and struggles with mental health, relationships and healing.
Content Warning: Venus contains graphic imagery and may not be suitable for all audiences. A short break will take place before and after the screening of this work to allow members of the audience who wish to do so to leave and return to the theatre.
Produced with support from SAW Video's JumpstART program.

Collective Presence | Edgar Hernandez | 2018 | 23 minutes
Bees are essential to keep the ecosystem functioning, which has an impact on our physical and mental health. Collective Presence, an experimental/documentary video project, reminds us of the crucial role of bees for humanity.
Produced with support from SAW Video's Indigenous Voices program.

Elsewhere | Lynda Hall | 12 minutes
Elsewhere is a 2-part film that uses memory and language to explore absence. In Alice, we see and hear through the repetition and de-construction of words and images, how memory is constructed, retained and decays. In Jim, the corporeal can’t be found, and only recorded words remain, reciting the genealogy of Jesus Christ. Together, these pieces document the filmmaker’s attempt to connect with her parents, and imagine where they are in their absence.
Produced with support from SAW Video's JumpstART program. 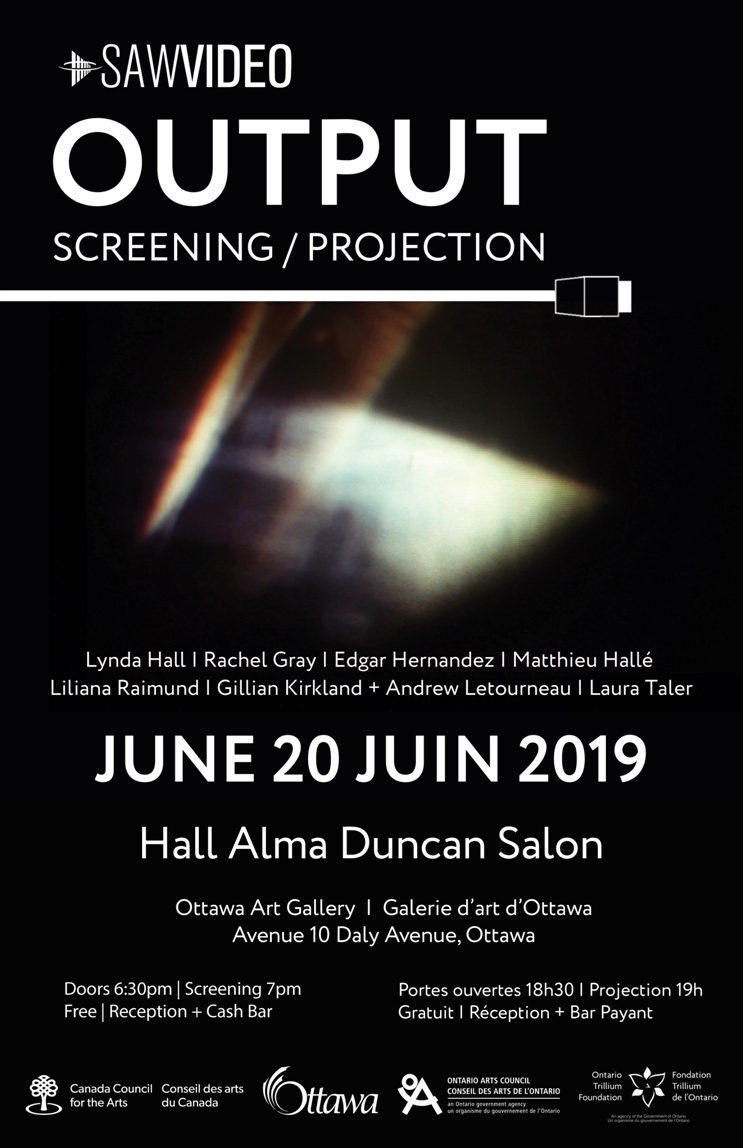