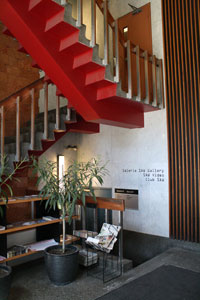 In 1997, SAW Video launched itself into the digital age with the acquisition of two Avid digital editing suites to replace its 3/4-inch videotape editing suite. These new technologies, together with an aggressive outreach program, saw operations grow fivefold over the next ten years. Annual youth-in-residence projects begun in 1998 — and continuing to 2006 — allowed a new generation of video makers to make their presence felt. Extensive renovations in 2001 further accommodated this growth, adding new media suites, production equipment, webcasting abilities, and a refurbished event space shared by SAW Video and SAW Gallery: Club SAW. The same year, after a decade and a half functioning side by side with SAW Gallery under a common board, SAW Video officially separated from the gallery and formed the SAW Video Association, a charitable, non-profit organization. To this day, SAW Video continues to collaborate with Galerie SAW Gallery.